Open Source Software and Patents: An Uneasy Journey of Discovery and Understanding

This post and its comments have been moved to http://opensourceandpatents.blogspot.com/2008/09/open-source-software-and-patents-uneasy.html
Posted by Dr. Steve Beller 18 comments: Links to this post

Defining and Treating the “Whole Person”

In this post, I discuss how the four interacting components of a "whole person"—one's mind, body, emotions, and "spiritual force"—affect human health and wellbeing.

Let's start by considering two articles published in the past few months about mental illness, which bring to light the staggering costs of not treating psychological problems (i.e., problems rooted in the mental and emotional components) because our society consider physical (i.e., body) health to be much more important than psychological health.

In May 2008, an article in Time titled "Tallying Mental Illness' Costs", reported that our country loses about $500 billion a year on mental illness and addiction problems due to lost earning potential, social security payments, homelessness, incarceration, and treatment. Only 60% of Americans with a mental disorder got no treatment for their ailment at all, and only 6.2% of current U.S. health care spending is devoted to the treatment of these disorders. And since these figures are based largely on 2002 numbers, the actual figures are probably greater due to the Iraq war (e.g., on PTSD and brain injury).

Last March, a New York Times article, titled "The Murky Politics of Mind-Body" discussed scientific evidence showing that mental (psychological) problems such as severe depression, addiction, and schizophrenia have a physiological base, including brain abnormalities, problems in brain circuitry, and genetic factors. In the past I've written about this issue at this link to the Wellness Wiki.

So, is there really a connection between mind, body, and emotion, and physical? And where does "spirit" fit in? Well, the following Venn diagram depicts my understanding: 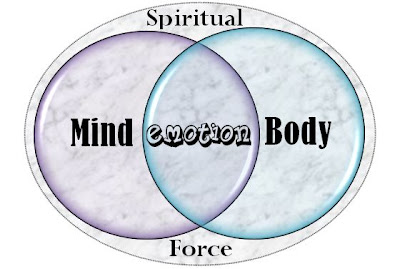 The circle to the right, labeled "Body," refers to a person's physiolocial functioning, which includes one's voluntary behaviors and involuntary reactions, as well as the functioning of all bodily systems (i.e., the muscular, skeletal, cardiovascular, respiratory, digestive and urinary, reproductive, glandular (endocrine and lymphatic), and nervous system (which includes the brain and sensory organs).

Note, however, that this intersection between mind and body actually includes more than emotions, such as:

Now to the large oval—the "Spiritual Force" (aka "life-force," "inner-self," consciousness, "soul," "qi/chi")—which encompasses the whole person … mind, body, and emotions. From a philosophical (cosmological) perspective, the spiritual force enables us to have a mind, body and emotions. In other words, this cosmic energy gives us the ability to be aware, to sense and perceive the world around us. It allows us to create, express ourselves, feel, have intuition, remember, speak, move, think, grow, etc. It's the force that builds our bodies from genetic information, and that transforms the electrical activity in our nervous systems into thoughts, emotions, and behaviors. At its most basic (and abstract) level, the spiritual force can be thought of as life itself, which gives us the potential to develop our minds and bodies. Some might even say it is a "piece of God" within each of us.

While certain Eastern (e.g., traditional Chinese) medicines attend to the spiritual force when treating patients, Western medicine mostly ignores it because this force cannot be observed or measured scientifically (see this link for a comparison of Eastern and Western medicine, and this link for more about complementary and alternative medicine).

So, is there a meaningful connection between the three components of the whole person—mind, emotions, and body—in which each components affects the others? YES!

Is there real value in treating the whole person by seriously considering the interactions between these three components? YES!

And, if you want to get philosophical, is it reasonable to conclude that a spiritual force gives rise to all thoughts, feelings, and physiology? YES! As such, might it be beneficial to a better understanding of how this force can be applied to healthcare in the Western societies? YES!

Posted by Dr. Steve Beller 8 comments: Links to this post

I've been collaborating with a fine group of people from Brazil who are organizing a seminar for October 1, 2008 in Brazil, which focuses on increasing understanding of two key technologies--Software as a Services (SaaS) and Personal Health Records (PHRs)--their evolution, and how they can be used together to improve people's health.

Information technology companies, together with colleagues from the University specializing in healthcare and related services, will demonstrate the potential strategic value of using PHRs and SaaS. This international effort, which focuses on Information Systems Action Research, intends to stimulate meaningful interaction between healthcare providers, scholars and technicians since it aims to promote innovations in networks and organizations. The seminar seeks to bring together professionals from around the world who are interested in collaborating in research and development efforts.

I will be presenting a video in which I share a vision of the future of the PHR and discuss where it can intersect with SaaS technology. Other presenters include a SaaS vendor (Coghead.com) and professors from Brazil and other countries who are involved in health-related activities, including chronic conditions and telemedicine.

To view the seminar's flier, go to this link.
Posted by Dr. Steve Beller No comments: Links to this post

Dr. Steve Beller
I received a PhD in clinical psychology from Hofstra University in 1981 and provided therapy for twenty years. I've also develop innovative software to manage a lifetime of whole-person health information designed to build profound knowledge that helps clinicians and healthcare consumers/patients make wise decisions. My most recent activities focus on or Reveal app, a self-awareness and self-help tool for youth and adults that provides deep self-knowledge and guidance to foster wellness and well-being. In addition, it’s designed to be a practitioner support tool that increases the value of mental health services through computer-assisted, measurement-based methods that assist in care delivery. I’ve also developed of a model of existence framework that explains the relationship between consciousness, mind, experience, reality and life purpose from a logical and scientifically sound perspective. In addition, I write about human nature and the way people judge each other.