In my previous post, I discussed how many Americans believe that a wealth is earned through hard work and poverty is a consequence of laziness. This cultural view implies that if the poor worked more diligently they could become wealthy. It doesn't matter if a person grew up in a disadvantaged community where a good education, healthcare, nutrition and housing were tough to come by, or if s/he was born into wealth privilege where those opportunities were abundant and easily accessible. All that really matters is one's effort. And since poor people's laziness is a personal failing, they do not deserve social and economic programs such as welfare; after all, it's their own fault they are poor. All they have to do is stop being lazy and they would get a good paying jobs that would bring them out of poverty. This includes the working poor...they just have to work harder.


So, as I understand this way of thinking, the assumption is that poor people don't mind being poor because it's easier than hard work. Sure, they'll probably die younger from disease, violence, poor nutrition, pollution and the like. Sure, they can't afford to travel for pleasure, go to fine restaurants, see Broadway shows, buy nice clothes, purchase a home in a good neighborhood, make investments and watch their money grow, etc. Sure, they might have to live in fear of lives, confront gang violence, grow up in broken families, have a history of being ridiculed, experience prejudice, become disheartened and hopeless, etc. But these things don't really matter to people in poor communities since they can take comfort and rejoice in being lazy. The joys of doing nothing productive--not earning a degree, not going to work and earning a good living--are so wonderful that the pain of poverty means nothing to them...they actually welcome it!


Is my understanding of poverty accurate? Am I missing something? If a few people come out of poverty, does it mean everyone in their community can if they just try hard enough? Is thie a logical view of reality?
Posted by Dr. Steve Beller No comments: Links to this post

How our Culture Influences Health

Things a culture considers important strongly influence the health of its people. Some cultures promote beliefs and values that adversely affect the health and well-being of people in certain communities. For example, in a culture that equates the degree of a person’s worthwhileness and deservingness with one’s material wealth, power, status and race is likely to judge poor, weak, “lower class” people of color as unworthy and undeserving and treat them accordingly. Conversely, it would be unlikely for people in a culture that values the virtues of empathy and self-sacrifice for the common good to judge others as less worthy and deserving.

One recent survey found that the U.S. “…public overall is about evenly divided over which has more to do with why a person is rich: 45% say it is because he or she worked harder than most people, while 43% say it is because they had more advantages in life than others.” The results differed by respondents’ income, educational level and party affiliation.

Likewise, many believe that people are poor because they have personality characteristics such as laziness, which is a personal failure that results in poverty. They believe that people who are worthy are rewarded, so those who fail to reap rewards must lack self-worth. This meritocratic view is entrenched within U.S. thought and results in resistance to social and economic programs such as welfare. After all, the belief that a poor person’s lack of prosperity shows a personal failing means that s/he should not be rewarded by public benefits. https://tinyurl.com/y8h7yjhz
Are these beliefs valid? Is it true that people in poor communities don't have adequate nutrition, healthcare, housing, etc. because they have in-born personality flaws that prevent them from getting a decent job and living a healthy lives? Are they just getting what they deserve?

Or should our society do more to help improve the social and economic conditions of disadvantaged communities that deny people healthy lives? Should we, for example, consider social determinants of health--such as good healthcare, nutrition and education--to be a right for all?
Posted by Dr. Steve Beller No comments: Links to this post 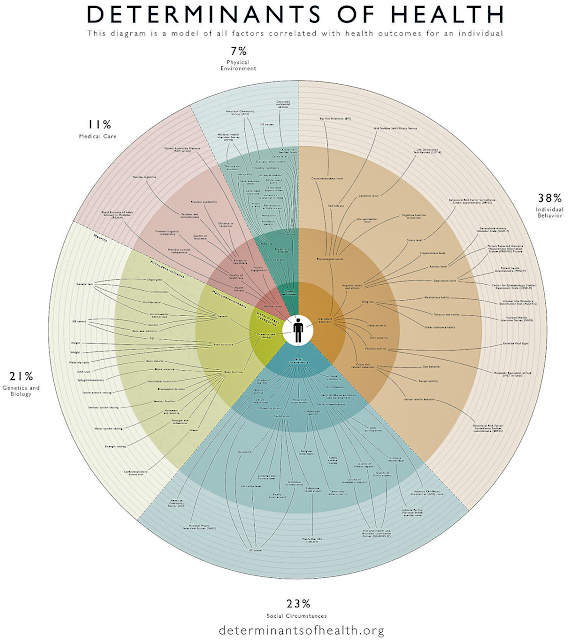 Social Determinants of Health (SDH) are being recognized as important factors in people health and well-being. They include:
I’ve been thinking about a useful way to examine SDH in terms of prevention and treatment of health problems that requires patient self-management and engagement.

How’s this for a start – Ideally, everyone should:
Determining what can be done to overcome the obstacles to the ideal should consider the positive and negative qualities of human nature and cultural values, as well as biomedical factors.
Posted by Dr. Steve Beller No comments: Links to this post

Design Thinking for Health IT

Design Thinking is a recent topic discussed on the AMA's Physician Innovation Network. Following is a comment I posted there.

We have been using design thinking since the 1980s, before I knew what design thinking is. As a practicing clinical psychologist with an strong interest in IT, I envisioned that computers could be used to collect and analyze patient-generated data to help with treatment planning and delivery, as well as outcomes evaluation. I’ve been working for the past three decades to develop and evolve health IT apps through an intuitive process that closely mirrors the five-step design thinking model:

1. Empathize. Through my clinical training, research, observation and questioning my patients, I gained understanding of the information patients could provide and computers could use to support clinical decisions aimed at behavioral and emotional change.
2. Define. This understanding led to insights that defined possible health IT solutions.
3. Ideate. I used these insights to develop more detailed ideas about these defined solutions and discussed them with my patients and colleagues.
4. Prototype. I built prototypes based on these ideas and showed them to others for their feedback.
5. Test. I continually tested and refined the prototypes based on my own observations, assessments, and feedback from others.

This process yielded important benefits. One was my realization our solution should extend to address the relationship between physiological and psychosocial factors since people’s thoughts, emotions and behaviors can affect their physical health and biomedical symptoms can present as psychological problems. As such, I developed a biopsychosocial ontology that categorized and associated physiological/biomedical and psychological concepts; it provided a blueprint that we used to incorporate medical and psychosocial data within the solution. Related benefits are that this solution is relevant to social determinants of health (SDH), and to patient engagement and activation.
We now plan to offer this solution in an open environment for its continued evolution through collaborative design thinking processes.
Posted by Dr. Steve Beller No comments: Links to this post

Practices for Comprehensive Health IT Systems

Following are practices for developing comprehensive health IT systems.

Something I realized early on is that such systems should be flexible enough to continually adapt to new healthcare knowledge and concepts; data models; value sets; data format, terminology and transport standards; use cases; workflows; and diverse user needs.

It should be able to accommodate the needs of PCPs and all clinical specialties, approaches and user roles, as well as patients, with highly useful and useable tools.

It should be able to work in centralized, distributed, point-to-point, and tightly- and loosely-coupled networks using client-server and standalone (desktop) tools.

It should be able to leverage cloud-based storage and computing (all flavors), as well as the local resources of untethered devices that may connect to the internet occasionally.

It should be able to work with third-party tools that provide additional relevant capabilities.

And if it provides decision support, it should focus on enabling knowledge-feedback loops among diverse groups of collaborators who build, share and refine models aimed at continually increasing the value of care patients receive through systematic process and outcomes research that cross organizational and geopolitical boundaries. These models should include ones that focus on the whole person (biomedical and psychosocial), social determinants of health (SDH), precision medicine, clinical workflows, population health, finances, and prevention (wellness care) as well as treatment and self-maintenance of chronic conditions.
Posted by Dr. Steve Beller No comments: Links to this post

Is the Biopsychosocial Approach a Scientific Model?

The biopsychosocial (BPS) model integrates a full range of biological, psychological, and sociocultural perspectives. A Critical Review of the Biopsychosocial Model states that BPS “provides a blueprint for research, a framework for teaching, and a design for action in the real world of health care…[However, science] operates within a system that asserts there is nothing in the universe beyond matter and energy interacting in a time/space matrix...[and] we don't have a rational, empirical way of investigating non-observables...this restrictive view excludes from scientific consideration a great deal of what we regard as quintessentially human.”

Furthermore, scientific models must have “true predictive value…[e.g., predicting] a man's psychological state from his biological data or vice versa [and it must unite ] the disparate elements of human life in such a way as to legitimize a holistic approach [in which] materialism involves more than just matter and energy. Today, we accept that information, its transfer and manipulation…is a material matter…[so] manipulation of brain-based information…is a materialist theory of mind.”

As such, BPS can be considered a scientific model. I contend it also has predictive ability, e.g.:

Posted by Dr. Steve Beller No comments: Links to this post

Dr. Steve Beller
I received a PhD in clinical psychology from Hofstra University in 1981 and provided therapy for twenty years. I've also develop innovative software to manage a lifetime of whole-person health information designed to build profound knowledge that helps clinicians and healthcare consumers/patients make wise decisions. My most recent activities focus on or Reveal app, a self-awareness and self-help tool for youth and adults that provides deep self-knowledge and guidance to foster wellness and well-being. In addition, it’s designed to be a practitioner support tool that increases the value of mental health services through computer-assisted, measurement-based methods that assist in care delivery. I’ve also developed of a model of existence framework that explains the relationship between consciousness, mind, experience, reality and life purpose from a logical and scientifically sound perspective. In addition, I write about human nature and the way people judge each other.