A Path to Profound Healthcare Transformation

In my last post—Think Small and Don't Rock the Boat—I harshly criticized the strategy that says: “Since our healthcare system focuses much more on profit than the value patients receive, we should do very little to increase the value of care delivered to patients because our current system punishes providers (hospitals, clinics and practitioners) financially for delivering high-value care.” I argued that instead of accepting the current nutty system, we should, instead, focus on rapid and radical (profound) transformation, so that providers are actually rewarded for delivering cost-effective care in a high-value, patient-centered healthcare system. This is no easy task, however, since those benefiting financially from the current system fight against profound change (as demonstrated by previous efforts at reform), which puts providers with good hearts and ideals in a very precarious and unfair situation.

A high-value patient-centered healthcare system not only delivers top quality care, but it does it efficiently and at a good price (i.e., cost-effectively) consistently over a person’s entire lifetime. This is very different than the healthcare system we have today. A typical example: Greater profits go to providers who are wasteful (over-test and over-treat); error-prone (pay for it once, then pay again to fix the mistakes); and costly (pay for more expensive treatments even though less expensive ones produce results just as good). Also, some providers “game” the system by, for example, manipulating diagnostic and treatment codes to increase payment rates.

I assert, however, that providers are not to blame for our country's lack of focus on care value since a “pathological mutation of capitalism” has infiltrated and broken our healthcare system. This puts providers in a very difficult situation: Insurance reimbursement rates to hospitals and clinicians have been dropping. At the same time, insurance premiums consumers and employers pay are rising continually, resulting in fewer insured patients, and thus greater non-payments from strapped patients and increased “charity care.” On top of that, there is substantial cost for managing huge amounts of administrative paperwork (e.g., submitting insurance forms, meeting unfunded government mandates) and computer data entry, not to mention enormous expense of malpractice insurance.

Under these conditions, providers have to treat more patients in same amount of time to maintain their profits, which mean greater likelihood of errors and omissions due to overload. And providers who keep their patients healthy longer through prevention, and who treat ill patients in the most cost-effective manner, are at serious risk of financial ruin. Not to mention the lack of good evidence-based guidelines defining what cost-effective care actually is. Crazy, isn’t it?!?

Why do I say our form of capitalism is at root of the problem? Consider what was aired on PBS on Sept 28, 2007 on the Bill Moyers JOURNAL program (here’s a link to the transcript). Mr. Moyers interviewed John Bogle, named by FORTUNE magazine as one of the four giants of the 20th century in the investment industry, and by TIME magazine as one of the world's 100 most powerful and influential people. They discussed how the lack of consumer value is endemic in America’s current form of capitalism, and in particular, how our healthcare system is adversely impacted. Following are quotes from the interview.


Every week we hear of another publicly traded company being bought by a private equity firm…What they are after is big and quick returns on their capital. To get it, they buy a company and cut the wages, pensions and health benefits of the employees who work there...Thousands of nursing homes have been bought up by private equity firms…Profits were increased by reducing costs, then investors quickly resold the facilities for a big profit— leaving…residents at those nursing homes worse off, on average, than they were under previous owners.… Within months, the number of clinical registered nurses at the home was half of what it had been a year earlier...budgets for nursing supplies, resident activities and other services also fell... the NY Times says 15 at Habana [nursing homes] died from what their families contend was negligent care. But when families sue, they often can't find out even who owns the nursing homes because of the complex corporate structures private equity firms have created to cover their tracks.


…it's a national disgrace. Simply put. ... we've taken …healthcare and [gone] from making it a profession in which the patient is the object of the game— preserving the patient "first do no harm" as Hippocrates …would have said— and turn[ed] that into a business. And so, it's a bottom line. I've often said we're in a bottom line society…[but] We're measuring the wrong bottom line.

…There's no accountability [of these private equity firms]. And it's wrong. It's fundamentally a blight on our society…It says something very bad about American society.…ultimately, the job of capitalism is to serve the consumer. Serve the citizenry. You're allowed to make a profit for that. But, you've got to provide good products and services at fair prices. …But, in the short term, there's all these financial machinations in which people can get very rich in a very short period of time by creating highly complex financial instruments [that are] not measuring up to basically their duty.

…we've moved from [service to the client before service to self] to a big capital accumulation — self interest — creating wealth for the …providers of these [financial] services [and] subtracting value from society. So, it doesn't work.
What we've done is have …a pathological mutation of capitalism from that old traditional owners' capitalism to a new form of capitalism, which is manager's capitalism. …corporations are run in a very important way to maximize the returns of its managers at the expense of its stockholders… the five or six top officers …get enormous amounts of pay for actually doing very little…Real work in companies is done by the people who are …doing the hard work of making companies grow… [yet] they get laid off. …That reduces expenses. That increases earnings and that means the CEO gets more.

So, instead of focusing on consumer value, our society’s pathological focus is increasingly on profit for the few by lowering value to consumers. This maladaptive mind-set, which underlies our disturbed form of capitalism, has infiltrated and is undermining our healthcare system and can no longer be tolerated! Changing this situation requires profound transformation, and the time is NOW!

In the remainder of this post, and in subsequent posts, I will present a model for the radical transformation of our healthcare system focused on increasing value to the patient/consumer. This model—called the “Patient-Centered Life-Cycle Value Chain”—is depicted in the diagram below. It describes the components of a healthcare value chain from a patient-centered perspective, which promotes better health and quality of life cost-effectively. 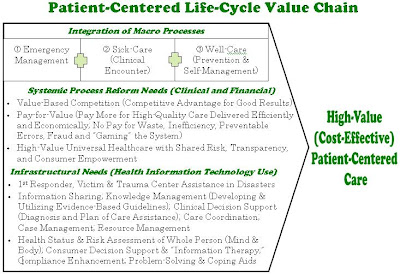 According to the diagram, three things are required before our healthcare system is able to foster high-value patient-centered care:
I’ll discuss each of these three things briefly in this post and delve into them more deeply in the next.

Integration of Three Macro Processes. Integration of emergency care, sick-care and well-care is required for caring for people in accidents and disasters, taking care of people when they are ill, and helping them avoid illness, enabling them to manage chronic conditions effectively to avoid complications and premature death, and empower consumers to make value-based decisions.[1]

Systemic Process Reform Needs (Clinical and Financial). Systemic process reform focuses on enabling providers to deliver high-value care and rewarding them financially when they do so. Such reform can be accomplished by:
Infrastructural Needs (Health Information Technology Use). Enabling the integration of the three macro processes and fostering high-value economic reform requires a new paradigm for health information technology. This technology includes software systems that:
In my next post, I explain how this transformation can occur using a patient-centric life-cycle value chain.

[2] The jury is still out as to whether this type of universal healthcare would be better managed by single-payer system (government), or if it should be left up to the private sector (insurance companies).
Posted by Dr. Steve Beller

Dr. Beller
Very well written article. In the simplest term, I like your idea of demanding ROI based healthcare...not the best but best that makes sense.

We have a blog and we share some common themes. Our goal is create discussion around total healthcare system and discuss to reach a conclusion on consensus solution.


I would invite you to visit, share your thoughts and certainly write an article. Our mission is to make healthcare a basic need that must be fulfilled.

Dr. Steve Beller
I received a PhD in clinical psychology from Hofstra University in 1981 and provided therapy for twenty years. I've also developed innovative software to manage a lifetime of whole-person health information designed to build profound knowledge that helps clinicians and healthcare consumers/patients make wise decisions. My most recent activities focus on our Reveal Wellbeing Enhancement software, a self-awareness and self-help tool for youth and adults that provides deep self-knowledge and guidance to increase their sense of wellbeing. In addition, it’s designed to be a practitioner support tool that increases the value of mental health services through computer-assisted, measurement-based methods that assist in care delivery. I’ve also developed a model of existence framework that explains the relationship between consciousness, mind, experience, reality and life purpose from a logical and scientifically sound perspective. In addition, I write about human nature and the way people judge each other.